Asparagus and Poached Egg on Toast with Spicy Crumbs
I drank too much port last night. My Dad and my uncle Stu had rattled into Paddington that morning at elevenish. The three of us are fans – a hereditary disease. were playing Millwall, potentially for promotion to the Championship if results went our way. Our aim for the day was perverse: We didn’t have tickets for the match but we wanted to soak up the atmosphere, to drink in riverside pubs, to be part of it. On the other hand we wanted to avoid Millwall fans, to avoid the score, to be apart from it. That tryst of hope and fear familiar to any football fan.
The more we drank, the more fear won out. Dad and Stu had to catch their return train from Paddington at five. From ’s Wharf near Tower Bridge we scuttled back west along the river in a slow boat, disembarking at Embankment so they could easily hop on the Bakerloo up to Paddington when time pressed. A last drink to impress them before they went: Gordon’s Wine Bar. A drunkard’s crypt of a bar, all dripping catacombs, tallow-lit barrels and braying atmosphere. Port, sold by the schooner. Or the slightly larger beaker. Which we ordered. Twice.
Half a bottle of port each, then Dad and Stu bow-legged it, bladders bulging, for their train. We’d avoided the score so far, but now, alone, I was intrigued. I staggered up the road to find a pub with Sky so I could catch the results. had lost. The agony of the play-offs beckoned. I had another pint. I chatted to a Millwall fan. I was woozy.
met me with a glass of wine back at Gordon’s. I was a bristling mess. I gabbled in cod Geordie at a goof in corduroy. Corduroy! Pah! took me home.
So, last night I was sick. Twice. I drank too much port.
This morning I felt rough as guts and wanted something pure and fresh to put in my mouth and purge me of my sin. Something that tasted of grass and of the sea. Something smooth but spicy to hug and punch me. Something of an apology to . This is the breakfast I made.
You will need… 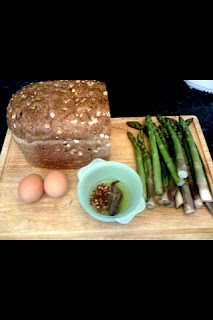 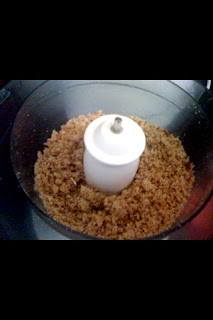 Blitz up one slice of bread in a food processor to make rough bread crumbs. Add the anchovies and chilli flakes with a slug of olive oil and give it a whiz to blend it all together. Pour the crumbs onto a baking tray and bung in a hottish oven to crisp them up. 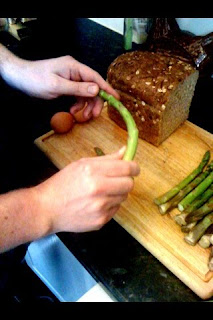 Snap the woody ends off the asparagus by bending each spear. It will snap at its natural breaking point. 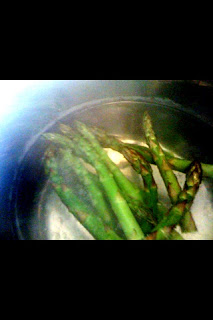 Boil till tender in plenty of salted water then drain and keep fresh in cold water. 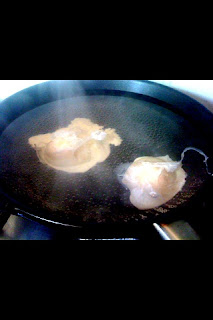 Poach your eggs as you like. This recipe works best if the yolks are runny as toddler’s tears though. 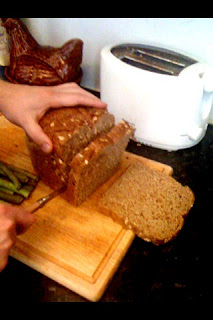 Whilst the eggs and asparagus are looking after themselves hew off two thick slices of bread and toast. Chop the parsley. 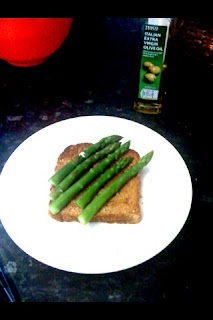 How to put it all together…
Put the toast on a nice plate and drizzle with some olive oil and sprinkle with some salt. Put the asparagus neatly on top. 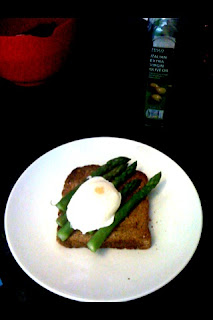 Put the poached egg on top of that and grind some pepper over it all. 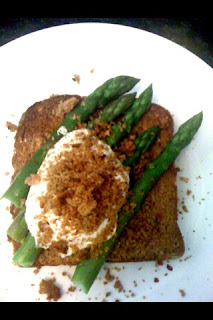 Sprinkle over some of the spicy, crispy crumbs. 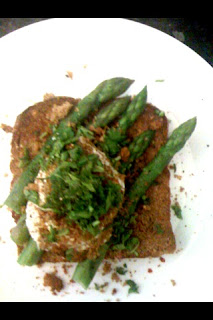 Sprinkle over some chopped parsley. 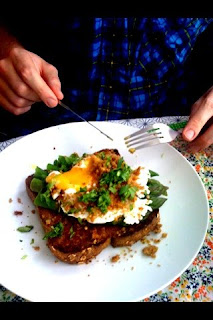 Eat it and get over your hangover!
from Sam Butler 2 comments: