A terrible beauty is born

It's Bank Holiday Monday. That End of Summer feeling. Helena and I on a morning walk through Victoria Park and along the River Lea to lift the spirits. The Olympic Park, its barricades and monoliths, to drag them back down. "We'll have to have pizza for tea." I go to get the ingredients but forget to buy stuff for lunch. Back home, face in the fridge-light, Helena rummaging the cupboards: Salad? Just lettuce. Cheese sandwich? Only a scrag of cheese.  Toast? Boring. Soup? No. Baked Potato? No No. Quiche? WHAT? No No No. Nothing's right. Then Helena suggests a banana sandwich just as I forage the fridge-back and pull out some Danish Blue from the other day. Dirty, dirty, disgusting thoughts that even the filthiest, firiest priest could not imagine. But it's right. It's bad but it's good. It's exactly what I want. Banana and Danish Blue cheese sandwiches for lunch. Look upon my works ye mighty and despair!

Labels: Grubs, How To, Pics, Sam Butler, The Tray Today

In which we almost eat Peter Rabbit

Something of a Knife 'n' Spork holiday took place last week. Scott, Lucy, Helena and I got all 'Swallows and Amazons' in a glorified static caravan near Windermere. (I say 'static caravan' - I mean fancy shmancy log cabin with decking and a jacuzzi - Wordsworth wept! Good.) We've holidayed together before and have developed a merry pattern of dog-walking, movie-watching and face-filling - some of which I'll share with you now.

Before I do, I should explain that this post is really a failure. Scott and I had discussed a number of potential holiday/Lake-District themed post ideas: some would have been pleasant (documenting every main meal of the week;) some would have held literary merit (making a Rabbit Pie a la Beatrix Potter or buying some of the Beef Olives from the local butcher as in B.S. Johnson's novel "Christie Malry's Own Double Entry";) still more would have been outright disgusting (The Cumberland Sausage Challenge, The Kendal-Mint-Cake-A-Thon.) In the end we had too much fun for any ideas to come to fruition. Lost hopes. However, having cooked a proper good roast and a cracking curry during the week we were confronted with an impossible choice for our last supper: curry or roast? Roast or curry?

We chickened out, manned up and did both. Here's how: 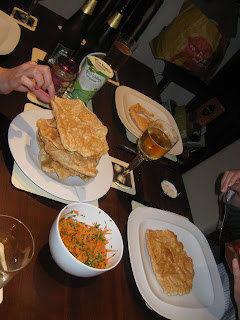 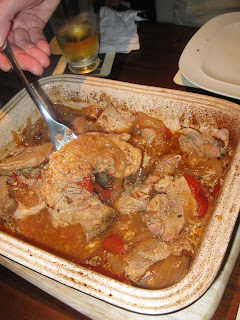 For the CurryRoast meat Scott marinaded a joint of pork shoulder in yoghurt, cumin, turmeric and plenty of mustard seeds. This was left to marinade for twenty four hours and then roasted with onions and tomatoes added towards the end of cooking to make it a bit saucy.

For the CurryRoast potatoes we boiled new potatoes and diced them fairly small before roasting them with black onion seeds, cumin, turmeric, garlic and chilli. 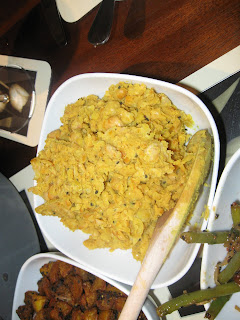 In place of mashed potato we made mashed chickpeas by simmering a couple of cans of chickpeas with some grated ginger and garlic, turmeric, black onion seeds and plenty of salt and pepper. 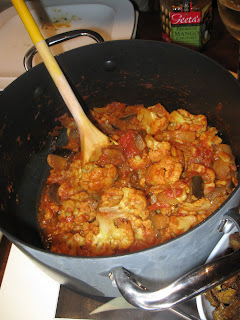 We considered making cauliflower cheese with paneer but felt that this would probably be horrible. Instead we made a cauliflower and aubergine curry with tomatoes, onion, ginger, garlic and the usual array of spices. Bubble bubble until delicious. We made loads of this so there was plenty the next day when it was even better. 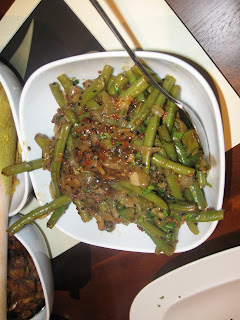 The CurryRoast greens took the form of some hot and sour green beans. Mustard seeds and black onion seeds were heated to popping point in oil then onions, garlic, chilli and plenty of ginger were sweated down with the seeds. Ground ginger and cumin was added before adding the green beans, lime juice and a little water. Boil the water away leaving green beans and jammy spicy-tart onions to which we added chopped coriander. 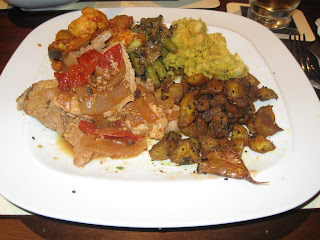 On the plate it looked like this. And then... 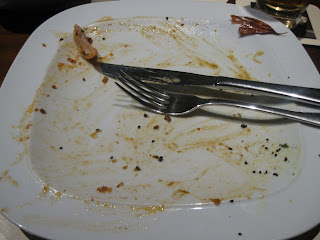 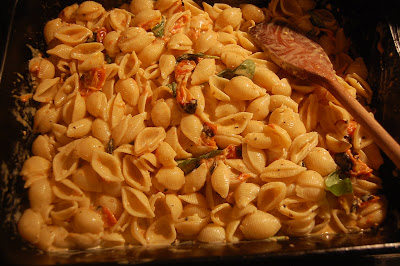 Yes, yes, more pasta. So what I’m drunk. On pasta.

This recipe is (again) courtesy of Mr Slater, with whom I have beef as a result of a dastardly plum cake recipe, but you’ll see what I mean as soon as I can sort out all those photos. This is fast, easy, and delicious, and it’s a perfect way to use up all those cherry tomatoes you bought because they were on sale and are now dangerously ripe.

Pop your tomatoes in a large baking tin with a couple of cloves of sliced garlic and drizzle the whole lot with e.v.o.o. Grill them until they blacken. Seriously. Not charred all over, but in some places the skin must be black. While this is happening, boil your pasta in A LOT of water, and make sure that that water is adequately salted. Nothing spoils pasta like a lack of salt in the cooking water.

When the tomatoes are burnt, mash them up a bit with the back of a wooden spoon and pour in some double cream and a handful of torn basil. Stir it all around, salt and pepper it, and grate over some parmesan liberally. You can probably skip the double cream if you want, but why would you want that?
from Philip No comments:

Labels: Grubs, How To, Philip Contos, Pics, The Tray Today

I’ve just made my yearly load of bramble jelly (recipe below), so I thought it would be a good time to post this. It’s a passage from ‘We Have Always Lived in the Castle’ by Shirley Jackson.

It’s a haunting, slightly surreal and darkly comic novel narrated by Merricat, a young woman whose family (apart from her sister Constance and uncle Julian) have perished in mysterious circumstances some years earlier. An overriding theme of the novel is food - growing, preparing and eating it – and I found this bit particularly emotive, and also a suitable way to introduce a jam recipe:

On Saturday morning I helped Constance. I was not allowed to handle knives, but when she worked in the garden I cared for her tools, keeping them bright and clean, and I carried great baskets of flowers, sometimes, or vegetables which Constance picked to make into food. The entire cellar of our house was filled with food. All the Blackwood women had made food and had taken pride in adding to the great supply of food in our cellar. There were jars of jam made by great-grandmothers, with thin labels in thin pale writing, almost unreadable by now, and pickles made by great-aunts and vegetables put up by our grandmother, and even our mother had left behind her six jars of apple jelly. Constance had worked all her life at adding to the food in the cellar, and her rows and rows of jars were easily the handsomest, and shone among the others. “You bury food the way I bury treasure,” I told her sometimes, and she answered me once: “The food comes from the ground and can’t be permitted to stay there and rot; something has to be done with it.” All the Blackwood women had taken the food that came from the ground and preserved it, and the deeply colored rows of jellies and pickles and bottled vegetables and fruit, maroon and amber and dark rich green, stood side by side in our cellar and would stand there forever, a poem by the Blackwood women. Each year Constance and Uncle Julian and I had jam or preserve or pickle that Constance had made, but we never touched what belonged to the others; Constance said it would kill us if we ate it.

I think I am generally a sucker for talk of preserving food in literature. It is also an ongoing thread in ‘Cold Mountain’ by Charles Frazier (try not to think about the dreadful film version featuring three of my least favourite actors). I think it must be some kind of fantasy nostalgia, imagining living in this somehow authentic state of self-sufficiency, relying on what grows in one season for all-year-round nourishment.

My annual blackberrying outing to Hackney Marsh is one of the small ways I try to emulate this. It’s a slightly treacherous activity, calling for sturdy shoes and leather gloves, but the bramble jelly lasts all year and is worth it.

Cook as many blackberries as you can find with enough water to cover the bottom of the pan for about 45 mins. Strain it through a cloth over a sieve overnight. Discard the pulp and measure how much juice you have. For every pint of juice add 1 lb jam sugar and half a lemon. Boil, and test every so often to see if it’s ready to set. Do this by putting a drop on a plate, wait a minute then touch it to see if the top has set. If it stays liquid, keep boiling. Decant into sterilised jars (heat glass in hot oven for 5 mins or so, pour boiling water over the lids). A good tip to create a jam funnel is to cut the top off a large plastic milk bottle. Put the lids on the jars while the jam is still hot.
from Amy Hemmings 1 comment:

Labels: Amy Hemmings, How To

The best vegetarian bacon pasta ever! 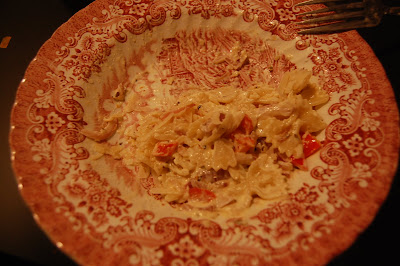 OK, so this was a total accident, which is why the photographic evidence is so poor. Or lacking, rather. This was Saturday night’s dinner and was so good that I couldn’t stop laughing with pleasure and rocking back and forth as I ate it. Seriously. It’s that amazingly good. Also, it’s incredibly simple. This is what you will need:

Half a red onion (preferably one that’s been sitting open in the refrigerator for a few days)
Half a red pepper (ditto)
Half (in fact, less, maybe a third?) a thing of mascarpone (ditto)
Dried oregano
Dried, crushed red chilies

Chop the onion and pepper and, while the pasta is boiling, sauté in extra virgin olive oil. Add the oregano and chilies. When the pasta is just about done, take the pepper and onion off the flame and add the mascarpone with a bit of the pasta water to loosen it. Drain the pasta and toss it in the pan, stirring it all around and coating it with the mascarpone mix. I ate the first bowl without parmesan because I didn’t think I could handle that much pleasure. By the second bowl my head was exploding and the parmesan was like a rocket of DMT up my spine and into my brain.

It tasted like it had bacon in it, but it’s completely vegetarian. Maybe you have to wait until everything is just about to go off. I definitely sniffed the mascarpone several times before using it and thought about throwing it away all together. Boy am I glad I didn’t. Do this recipe and die.
from Philip No comments: