An incomprehensive guide to Maltese cuisine

First kill your bird of prey, crush and cover in chocolate, make round and roll down a hill. For those who do not know, cooking the Maltese way, not only are the recipes unpronounceable they are equally inedible. But for the tryers amongst us who just can’t resist a challenge I have scoured the larder, the internet and looked into the dark heart of my own past to come up with the following recipes.


FOR STARTERS:
Angels on Horseback, which is grilled liver, wrapped in bacon. Essential at any traditional wedding cocktail buffet.
Soppa tal-Kirxa (Tripe Soup) – as it sounds. Horrible
Soppa ta’ l-armla (Widow’s Soup), which is basically vegetable soup simmered for an hour until so well done the veg are losing their identity and merging with each other in one big gloopy mess. You then crack some eggs into it and add ricotta and gbejniet (sheep’s cheese). Cook for a further 30 mins. Just when it couldn’t get any worse you top it off with a glass of milk. Why? 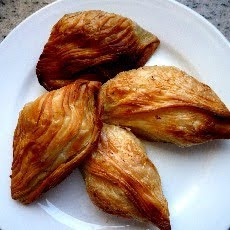 Pastizzis, (a.k.a Maltese cheesecake). They are kind of like pasties. My dad would hang around outside Maltese cafés waiting for sailors to throw him one of these - or at least that’s what he told me. Traditionally they are filled with either ricotta cheese or mushy split peas. Although, I had some at my brother’s wedding that were filled with minced lamb – and were rather nice. Best bought from the Little Malta bakery in
INTO THE MAINS
Lampuki Pie - Lampuka is the Maltese name for Mahi Mahi or Dolphin fish. It has fine, white flesh and only a few large bones. It is in season for around four months and doesn’t freeze well. So should you be fortunate enough to have one in your hand, here's what to do with it. Cut into slices, roll in seasoned flour, and fry lightly. Use the same oil to fry some onions in until brownish, add chopped tomatoes for 5 minutes. Then add spinach, olives, capers, mint and lemon peel. ½ pint of water and simmer till sauce becomes rather thick. Season and leave to cool. Line a greased dish with flaky pastry, dot with fish and sauce. Cover with more pastry. Bake in mod oven for about an hour.


Timpana is baked macaroni in pastry. So not only do you get a pasta dish you get pie too. Result. 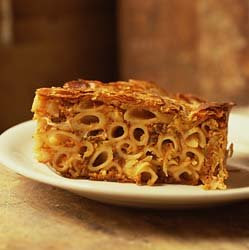 Only the filling is tomatoes, hardboiled and raw eggs, chicken giblets, ox brain, pork liver and a little bit of minced beef (you wouldn't want to overdo it now). I know a woman who swears she makes the best Timpana in and on family gatherings we are forced to consume this rather starchy and slightly foul smelling concoction. It's a bit like eating corrugated cardboard the dog has been using as a toilet and guarantees you won’t be able to shit for a week.
Pulpettun - A Large Meat Cake – mix together beef, pork, ham and liver with parmesan, breadcrumbs and beaten eggs; wrap in a pork caul and say a prayer. Bake until well done. This should be eaten cold or not at all.
For the unsentimental, there is Laħam taż-żiemel (stallion meat) –which is exactly what it says, usually steamed.
Fenkata – Rabbit Stew: 1rabbit, 2 onions, garlic, 3 large tomatoes, tomato paste, 3 potatoes, 5 carrots, 200 g peas, 2 bay leaves, mixed herbs, half stock cube, 275 ml red wine, seasoned flour, olive oil . Roll rabbit bits in the flour and add to heated oil and cook until light brown. Add veg. Pour over wine. Add the bay leaves, stock and paste. Simmer for 1 ½ hours. Add more wine if the sauce begins to dry up. This is actually rather nice. 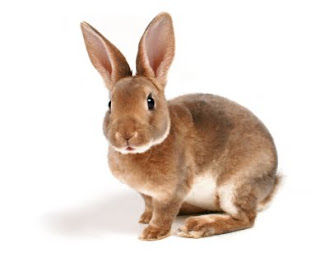 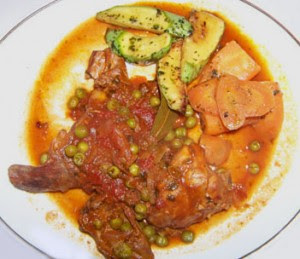 JUST DESSERTS:
Qagħaq tal-Għasel (Treacle Rings) Made from a semolina pastry with a filling of treacle, semolina, anisette, citrus zest, cinnamon and cocoa. We used to get deliveries of these post Xmas and I used to think they had gotten stale on the slow boat from until I tried some fresh. It is like eating the calcified bones of a dead sailor flavoured with deep sin. 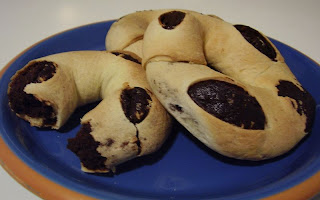 Or the even more unpronounceable /inedible Kaghka Tal-Kavatelli. I once made this as a birthday treat and it turned into a work of art. Form a paste from flour, egg, butter and orange-flower water. Roll into long strips, out of which cut tiny diamond-shape pieces. Fry the pastry pieces until crisp. Leave to cool. Boil treacle, sugar and rind of an orange and a lemon. Throw in pastry pieces. Place into a buttered baking dish. Leave to set.


SOMETHING TO WET THE WHISTLE:
Cassar de Malte, of course. ’s first quality sparkling wine which is produced in the “Méthode Traditionnelle”. It is made in limited quantites and is made with the chardonnay grape with citrus lemon fruits and complexities of yeast, biscuit and bread. What more could you ask?
And don’t forget to listen to the ’s favourite children while you slave: Bryan Adams, Gary Glitter and Britney Spears. You couldn’t make it up!


P.S. If you do try any of the dishes Ix-Xorti t-Tajba! as they say.
from Jasper

Labels: Grubs, How To, Vincent Cassar