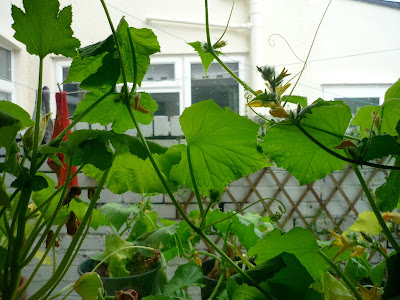 For the first time in a while I've had some time to think about gardening, and as a result the prospect of having some home-grown vegetables to eat seems pretty good this year. In order to not over-stretch our ability to attend to plants, I decided to concentrate on 3 vegetables: tomatoes, courgettes and cucumbers.
Tomatoes: 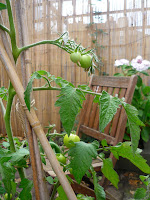 Pretty much every year for a while I have grown tomatoes, with varying success. Last year, for instance, was not very productive (a combination of a wet summer and too little time to concentrate on vegetables), but previously we have had enough tomatoes to make pasta sauce and store it (for a little while at least). Unfortunately, since the arrival of the dog, we've had to give up the best tomato growing flowerbed as that is where he prefers to sit. But there are other areas of the garden which seem to do ok. This year we have 'Shirley' and 'Juliet' in some pots on the corner of our yard (as pictured left). Last year I bought some hanging baskets and tried out growing tomatoes in one, which seemed to work (runner beans, however, do not). This year I bought a variety of tomatoes specially suited to hanging baskets and so far there is lots of fruit. 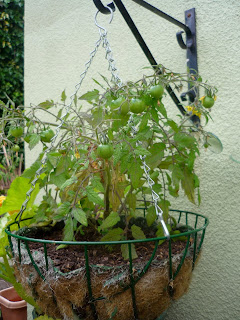 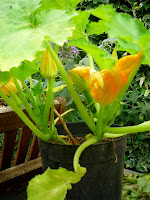 For the first time ever I have successfully grown
some plants from seed (a big bonus of having windowsills at last - woo!), both cucumbers and courgettes. I have grown courgettes before, fairly successfully (again, the last couple of years have been rather wet, and there have been mould issues), but never cucumbers. The main impetus behind this addition is to make pickles. We go through jars of pickles like nobody's business in this house, so it seemed sensible to try creating 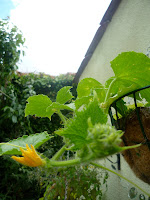 our own. Wary of slugs - which plague our garden - I decided to put some of the courgette/cucumber plants outside, and keep some inside (the first photo of this post is our view from the kitchen sink). Despite not quite managing to re-pot over half the plants, they all seem to be doing ok, or more than as the cucumber plants in particular are taking over every space they are in, with their curly tendrils reaching out to grab anything they can. The most exciting thing is that we now have our first cucumbers showing up - teeny and prickly at the moment, but hopefully they will manage to get big enough to pickle. 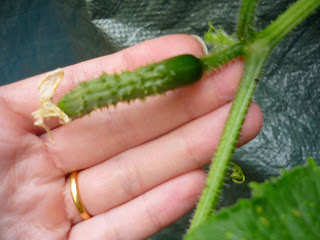 I will be back with further news as the plants progress (and the pickling begins). Watch this space!
from Lucy Fife Donaldson