One of our number has another blog, in which he chronicles meals which include a fried egg on them, it's called 'put an egg on it!'. We noticed early on that one of his favourite places to put an egg is a vegetable stir-fry with noodles. When I first saw this I thought he was flat outta his mind, then I tried it and I realised he is a genius. This dish is now a staple in our household, and in honour of him we call it 'The Contos'. We ate it last friday: 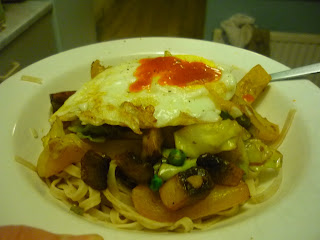 (that isn't a super orange yoke, but a dash of chilli/ginger/garlic sauce - it was gooooood)
from Lucy Fife Donaldson